Clearing energies is VITAL to my daily spiritual work and daily life. 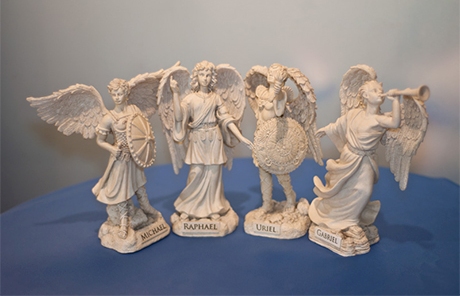 I work every day with Archangel Michael. He’s my go-to Archangel to call on to place a protective bubble around me at all times, to keep the lower level vibration energies out of my space.

I keep my Archangel Michael statue on my sacred altar, along with my various crystals, angels and other artifacts.

I bought my Archangel Michael statue from my local Angel store, the Boutique Ange Neige in Montreal, Quebec, Canada. They are my #1 resource for all things angelic, in town.

Something I was taught while I studied psychic mediumship locally, was how wonderful it was to use burning sage to smudge or clear your energy.

I love the smell of sage and smudging instantly brings my soul to that beautiful place of inner bliss and peace.

I smudge before I do some spiritual work, as part of a message circle, or to clear my energy and aura after paranormal investigations or simply from wandering around in the city which collects energy from other people and beings out in the world.

Traditionally burning sage, called smudging, is a sacred aboriginal practice used to clear the environment and people. Stemming from extensive research, Chiiyaam was created with the aim of finding an alternative to the inconveniences of smoke.

Chiiyaam, previously called Invocation Liquid Smudge, has an appeasing effect as it brings calm and serenity. As it is, Chiiyaam is an Algonquin word which means “Peace”.

Thanks to a good friend, I discovered that this smudge was also sold in a liquid format, as liquid smudge. It’s sold in my local crystal and metaphysical stores, and much to my delight, is made by hand by a local Aboriginal tribe right here in the province of Quebec.

I often  bring it with me when I head into the city.I usually give myself a quick spritz with the spray, and then spray myself on the go, if need be.

It’s great to use before you head off to be in a crowd, or if you’re traveling to places filled with sick people – like hospitals and clinics.

Satya Sai Baba Nag Champa is made in India by the Shrinivas Sugandhalaya company. Each stick is a special blend of natural herbs, resins, flowers and oils that are hand rolled. Each stick weighs about a gram and burns for approximately 45 to 60 minutes.

This is my very favourite incense in the whole world. It’s imported from India and has a wonderful exotic spiciness to its fragrance.